Destroying Pancreatic Cancer must become everyone’s mission. So, we aim to shine a light through the media on the challenges of finding better treatment options and early detection screening tools. 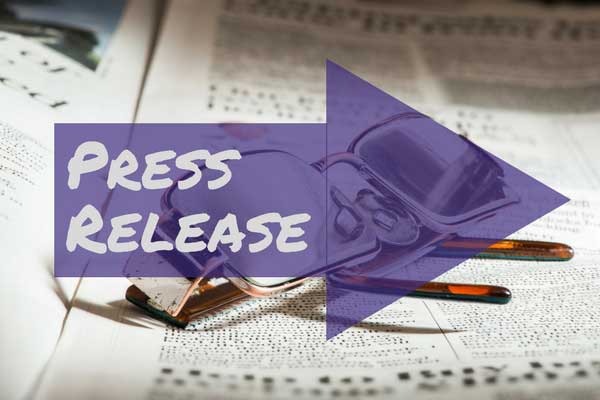 PHOENIX, Ariz. and Atlanta, Ga. — March 12, 2018 — Destroy Pancreatic Cancer, an Atlanta-based non-profit dedicated to finding better treatments for the most deadly of all cancers, is donating $1 million for a unique pancreatic cancer clinical trial designed by the non-profit Translational Genomics Research Institute (TGen).

Destroy Pancreatic Cancer was founded by Georgia businessman John Couvillon, who had survived melanoma and brain tumors, before succumbing last year to pancreatic cancer. It was this third and most challenging diagnosis that spurred his advocacy for other patients facing serious disease.

“Stay positive, be grateful and love life,” was a daily mantra for Mr. Couvillon, who promised that he would do everything in his power to destroy pancreatic cancer.

“While he is no longer here with us, it was never lost on John how blessed he was to be able to pay it forward and help provide hope and better options for those battling this disease,” said Atlanta businessman Howard Young, Chair of the Board of Destroy Pancreatic Cancer. Young has survived pancreatic cancer for 15 years, a remarkable feat he attributes to the care he has received from Dr. Daniel D. Von Hoff, TGen Distinguished Professor and Physician-In-Chief.

Dr. Von Hoff, one of the world’s leading authorities on pancreatic cancer, designed the Destroy Pancreatic Cancer clinical trial at the Piedmont Cancer Institute in Atlanta, where the study initially will enroll up to 25 patients.

“This research represents a unified effort, funded by passionate people, who want to find a cure,” said Young, a beacon of hope for anyone diagnosed with pancreatic cancer. When he was first diagnosed in 2002, he was told that he only had a 1 in 5 chance of surviving 6 months.

“Survivors need to lead the charge and fund these key research studies,” added Young, a Board Member of the TGen Foundation, and chair of its National Pancreatic Cancer Committee. “Where once there seemed little hope, we now are seeing success. With the mapping of the human genome, and the translational medicine borne out of that, we are seeing great opportunities to not only cure pancreatic cancer, but like dominos, find cures for other cancers, as well.”

The pancreas is an essential organ behind the stomach. It secretes enzymes that are key to digestion, and hormones that maintain stable blood-sugar levels.

Pancreatic cancer this year is expected to kill more than 44,000 Americans, making it the nation’s third leading cause of cancer-related death, following lung and colon cancers. In 2017, it surpassed breast cancer. Unlike many of the major cancers, in which the annual number of deaths remained stable in recent years, the number of patients succumbing to pancreatic cancer has increased by more than 10 percent in the past five years.

More than 60 percent of pancreatic cancer patients die within the first year of diagnosis. Because the disease exhibits no symptoms in its early stages, finding a means of early detection is a paramount goal. Fewer than 10 percent of patients survive for more than five years, the lowest survival rate of all major cancers. But with new treatments, these numbers are starting to improve.

More than 1 million people have died in the past two decades from pancreatic cancer, a statistic that Destroy Pancreatic Cancer maintains is not only tragic, but also unacceptable, which is why the organization’s goal is to fund advanced research that leads to earlier detection and improved treatment options.

TGen, an affiliate of City of Hope, is a world leader in the clinical development of novel therapeutics for the treatment of pancreatic cancer, including one of the current standard-of-care regimens for this disease — nab-paclitaxel plus gemcitabine. TGen is building on this success and currently is involved in 13 pancreatic cancer clinical programs.

“You must maintain hope and faith that you will get well,” Young counsels pancreatic cancer patients. “There are a lot of reasons for hope now, and this new clinical trial at Piedmont Cancer Institute is a primary example.”

About TGen
Translational Genomics Research Institute (TGen) is a Phoenix, Arizona-based non-profit organization dedicated to conducting groundbreaking research with life changing results. TGen is focused on helping patients with neurological disorders, cancer, diabetes, and infectious diseases, through cutting edge translational research (the process of rapidly moving research towards patient benefit).  TGen physicians and scientists work to unravel the genetic components of both common and rare complex diseases in adults and children. Working with collaborators in the scientific and medical communities literally worldwide, TGen makes a substantial contribution to help our patients through efficiency and effectiveness of the translational process. TGen is affiliated with City of Hope, a world-renowned independent research and cancer and diabetes treatment center: www.cityofhope.org. This precision medicine affiliation enables both institutes to complement each other in research and patient care, with City of Hope providing a significant clinical setting to advance scientific discoveries made by TGen. For more information, visit: www.tgen.org. Follow TGen on Facebook, LinkedIn and Twitter @TGen.

Destroy Pancreatic Cancer will post a public announcement on this website when the trial can begin enrolling patients. We encourage you to speak with your medical team about all trial opportunities, as well as inquire about this trial. Contact information will be posted soon.

ATLANTA (July 10, 2017) – Destroy Pancreatic Cancer, a non-profit organization with the goal of funding clinical trials and advancing research that leads to earlier detection and improved treatment options for pancreatic cancer, the third leading cause of cancer deaths in the U.S., today announced its official launch.

Howard Young, a 15-year pancreatic cancer survivor, will lead the foundation. Clinical trials will be led by Daniel D. Von Hoff, M.D., F.A.C.P., physician in chief and director of translational research at the Translational Genomics Research Institute in Phoenix and the world’s foremost pancreatic cancer researcher; Douglas Evans, M.D., chair of the Department of Surgery at The Medical College of Wisconsin and one of the nation’s top surgical oncologists; and W. Perry Ballard, III, M.D., co-founder of Atlanta’s Piedmont Cancer Institute, an MD Anderson Cancer Network certified member.

Destroy Pancreatic Cancer was founded by John Couvillon, a pancreatic cancer sufferer who recently died while undergoing chemotherapy for a recurrence. Young and others involved in the start-up vowed to continue what Couvillon started.

“After first being diagnosed and undergoing surgery in 2014, John Couvillon told his surgeon, Douglas Evans, ‘I want to help,’” said Young. “Today, we’re proud to see John’s initial vision through. We have assembled three of the preeminent pancreatic cancer physicians in the world and several pancreatic cancer survivors to help lead a foundation whose purpose is to put money in the best possible hands to destroy pancreatic cancer.”

In addition to funding clinical trials, Destroy Pancreatic Cancer (DPC) is committed to providing a landing spot for sufferers and survivors. The foundation’s motto, Hope and a Plan, is counter to the stigma surrounding pancreatic cancer – one that offers little promise of a cure.

“It’s going to take unified research and a collaborative effort funded by passionate people who want to find a cure,” said Young. “It’s a devastating disease and many people and families that have been affected don’t ever want to hear about it again. But the few survivors we have need to step up, lead the charge and mobilize those affected to help fund key researchers.”

“DPC’s ancillary goal is to shift the current mindset,” said Mike Broxterman, a DPC board member and longtime friend of Couvillon’s. “While the statistics don’t lie, we want to give encouragement to those who have been diagnosed and are affected by this disease. There’s a lot of reason for faith – there are new therapies and clinical trials that offer a great deal of hope.”

For more information about Destroy Pancreatic Cancer, please visit destroypancreaticcancer.org and engage with DPC on Facebook. 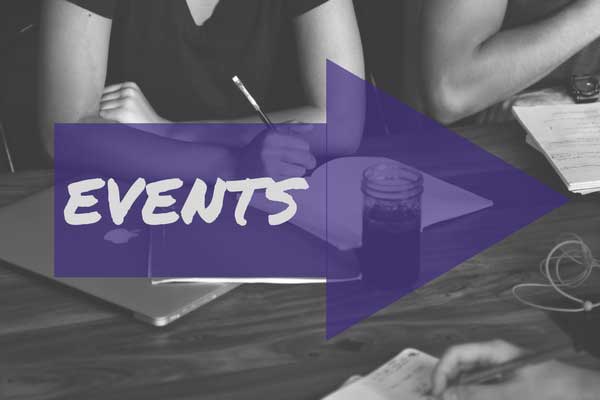 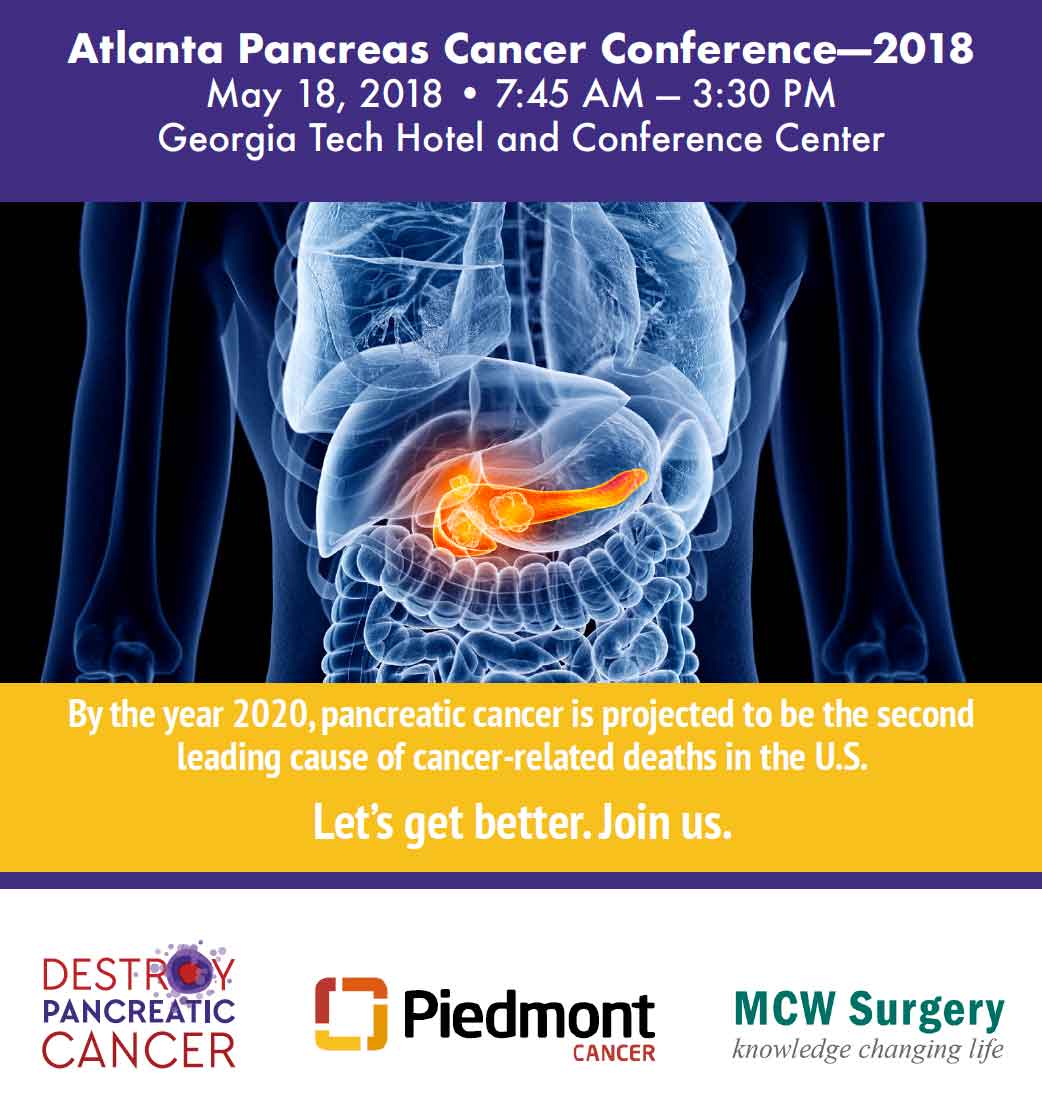 The Atlanta Pancreas Cancer Conference will feature engaging lectures from leaders in the treatment of pancreas cancer, focusing on current advances in the basic science of pancreatic cancer, particularly in the areas of tumor staging, radiation and chemotherapy treatments, and surgery.

Contact Tia Williams with any questions at 404-425-1800 or tia.williams@piedmont.org

Piedmont Healthcare is accredited by the Medical Association of Georgia to provide continuing medical education for physicians. Piedmont Healthcare designates this live activity for a maximum of 6.25 AMA PRA Category 1 Credits™. Physicians should claim only the credit commensurate with the extent of their participation in the activity. 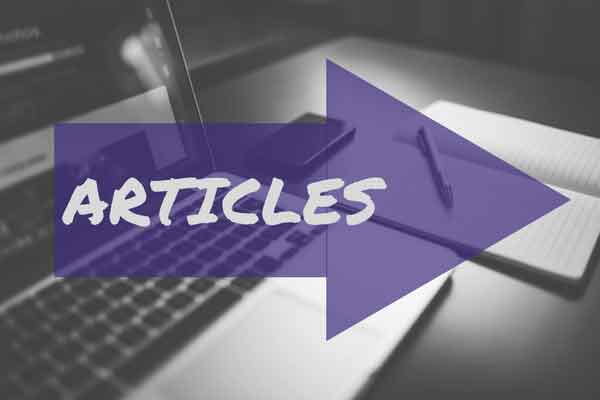 Articles in the news 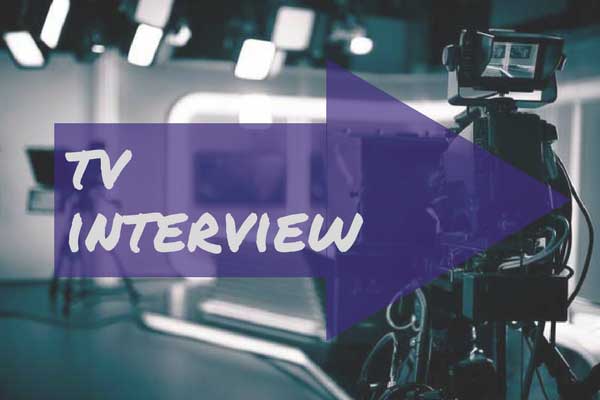 Learn and Be a Pay-It-Forward Hero!

Sign up to be the first to hear about our "wins" against pancreatic cancer.

Our mission is simple—To destroy pancreatic cancer.
Our promise is guaranteed—To fund and advance research that leads to earlier detection and improved treatment options.
Our goal is within reach—To establish Hope and a Plan for all pancreatic cancer patients. The hope comes from the research and clinical trials performed under a true collaborative model. The plan supports today's patients in quickly developing a strategy to win the battle against pancreatic cancer. 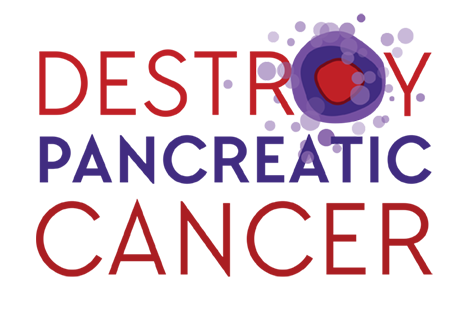